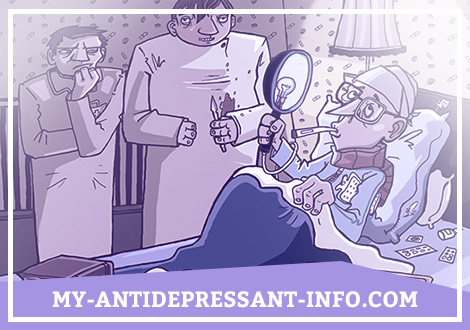 What is a Hypochondriacal Disorder?

Hypochondriacal disorder is one of the most particular psychopathological phenomena, the main feature of which is the constant excessive concern about the possibility of getting one or more severe and progressive somatic disorder. Unlike patients with somatized and undifferentiated somatoform disorders, patients with hypochondria not only suffer from somatic discomfort, but also fear that they still have an unidentified serious, life-threatening illness. Patients constantly make somatic complaints or are concerned about their somatic condition. Normal or ordinary sensations and phenomena are often interpreted by the patient as abnormal and unpleasant, with attention usually focused on one or two organs or systems of the body. The patient may call the alleged somatic disease or body defect, however, the degree of conviction in the presence of the disease usually varies from consultation to consultation, and the patient finds it more likely that one disease, then another. Often the patient assumes that, in addition to the underlying disease, there is an additional one. Often there are severe depression and anxiety, which may justify an additional diagnosis.

In case of hypochondria, it is not just anxious suspiciousness as such, but a corresponding mental, intellectualized processing of certain painful sensations from the somatic sphere. Often it ends with the construction of the concept of a particular disease with the subsequent struggle for its recognition and treatment. The psychopathological nature of the hypochondria is confirmed by the fact that when combined with a real somatic disease, the patient does not pay much attention to the latter and to the attention paid to the imaginary disorder.

This syndrome occurs in both men and women, and there are no special hereditary characteristics (unlike somatized disorder). Many patients, especially those with mild forms of this disorder, continue to be observed as part of primary care or non-psychiatric medical services. Treatment of patients to a psychiatrist is often rejected, unless it can be implemented in the early stages as a result of tactful interaction between the doctor and the psychiatrist. The degree of productivity disturbance is very diverse. Some patients, as a result of their existing symptoms, dominate the family and manipulate it, as well as social structures, and only a small proportion of patients function normally.

According to statistics, disorders range from 3 to 10% among patients of general practitioners.

Hypochondriacal states more often develop in mature or elderly age, although they rarely appear for the first time after the age of 50 years, and the symptoms and disturbance of productivity usually have a chronic and undulating character. The disorder is equally common in men and women.

The main structural elements of the disorder include a variety of bodily sensations. First of all, paresthesia should be noted – feelings of numbness, tingling, crawling, chills, etc., not caused by external stimuli. This is followed by psychalgia – pain caused not by a specific lesion, but due to a physiological increase in the pain threshold. This is the usual pain without real reason, often multiple. Another such element is senestoalgia – pains that have a more bizarre and peculiar character. For example, headaches here are already burning, shooting, piercing, stabbing. This is followed by senesthopathy – also arising spontaneously and extremely painful sensations that do not correspond in localization to specific anatomical structures. Senesthopathy is characterized by novelty and variety of sensations; patients find it difficult to accurately describe them. And finally, synesthesia – feelings of obscure total physical distress or malaise with peculiar, difficult to describe disturbances in the motor sphere (unexpected physical weakness, wiggling and uncertainty when walking, heaviness or emptiness in the body).

Symptoms often relate to the gastrointestinal and cardiovascular systems. Ordinary sensations and phenomena are interpreted as unpleasant. The patient may call the alleged somatic disease, however, the degree of conviction in the presence of severe pathology varies from consultation to consultation, and the patient considers that one disease or another is likely. Often the patient assumes that in addition to the underlying disease there is an additional one. Also, a monotonous, emotionally inexpressive presentation of complaints, supported by extensive medical documentation, is characteristic of a hypochondria disorder. Usually the patient flashes when trying to dissuade.

For a reliable diagnosis, a combination of both criteria is required:

It should be noted: in a number of cases the desire to overcome the “ailment” comes to the fore either with the help of the “selection” of one’s own health improvement measures, including physical activity, diets that do not meet medical recommendations, self-treatment with various medications, etc., or a change in the whole lifestyle with the formation of a special gentle regime (“overvalued hypochondria”).

Differentiation with the following disorders is important:

The main role in the treatment belongs to psychotherapy. Pharmacotherapy aims to create the possibilities of psychotherapy and is carried out to correct the associated symptoms. The choice of drugs in each case is determined by the characteristics of the symptoms and associated manifestations. The following groups of drugs are used for pharmacotherapy: first-choice drugs are antidepressants (tricyclic and SSRI groups); second-choice drugs are beta-blockers and normotimics; at the initial stages of treatment, a combination of an antidepressant with benzodiazepine is possible; antipsychotics with a sedative effect are also used as reserve drugs with severe anxiety that cannot be stopped with benzodiazepines. In addition, the therapy of somatoform disorders must be supplemented with vasoactive, nootropic drugs and vegetative stabilizers.