Paroxetine: An Essential Drug Against Depression

Paroxetine is a relatively new drug used to fight depression, which belongs to the family of selective serotonin reuptake inhibitors (SSRIs).

Serotonin is a monoamine considered as a neurotransmitter, a molecule responsible for transmitting information through the nervous system. In addition to serotonin, monoamines include substances such as dopamine, noradrenaline, and adrenaline. 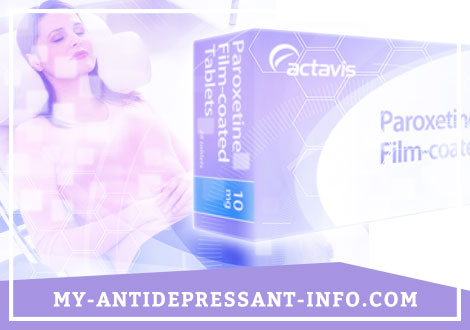 Likewise, we know this neurotransmitter as "the happiness hormone" because of its powerful effect on the mood.

Experts consider SSRIs such as Paroxetine drugs of choice in depression, although physicians may use it for other psychiatric disorders such as anxiety, panic attacks, and obsessive-compulsive disorder.

Until the 1980s, there were no SSRIs; other drugs controlled the depression market, such as tricyclic antidepressants, which had many side effects.

A major exponent in the pharmaceutical market such as GlaxoSmithKline (GSK) created and marketed paroxetine under the name of Paxil in 1992. Although its effect on depression was better and the side effects were less harmful, it did not sell well.

In 1999, the company devised a powerful campaign, which focused on the use of paroxetine. They gave it a new angle and marketed it as a treatment for a new disorder "social phobia" or "social anxiety".

This campaign was very successful, so much so that people later referred to paroxetine as the "anti-timidity drug", even though its main effect was not that.

Today we know that shyness is not a psychiatric disorder or something similar, it is just a personality trait, which does not merit pharmacological treatment but specific therapies adapted to each person. However, if it were not for this campaign, paroxetine might not be on the market - or at least not as popular.

How It Works - Mechanism of Action

Paroxetine is an antidepressant drug that acts on serotonin reuptake receptors, preventing its function to prolong the neurotransmitter presence in the synaptic space.

Under normal conditions, they do not alter the concentration and cycle of release and recapture, so the amount of serotonin available in those spaces suffices to maintain the mood and control the psychic functions that depend on serotonin.

In depression, experts have proven the presence of low serotonin levels, and in other pathologies such as obsessive-compulsive disorder, so keeping the little serotonin released helps prolong its effects.

In addition, according to in vitro studies, specialists observed that the effect of paroxetine is several times greater than sertraline (Zoloft) and significantly more potent than fluoxetine (Prozac).

Pharmacokinetic: The journey through the body

Doctors use Paroxetine orally as a tablet, suspension (liquid) or capsules, which our digestive system absorbs completely. One of its best qualities is that, within the body, it is widely distributed, even in the CNS (it can pass through the blood-brain barrier) where it attaches to the serotonin neuronal receptors.

The half-life of the drug in the body is a crucial factor because it determines the useful space of the drug, i.e. the time in which we will maintain an appropriate concentration of this drug, enough to preserve its pharmacological effect. In addition, the ideal time for any drug is at least 24 hours, which makes it easier to control the drug intake. It is different having to take one pill a day than taking 4 or 5!

In an adult, the half-life is 23-24 hours, a time to consider for its interactions with other drugs. The liver metabolizes Paroxetine and creates several metabolites, where none of them will affect the body, i.e. they are harmless.

They leave the body mainly through the renal tract (62%) as urine, and the rest goes through the feces in the form of bile. For these reasons, and as with many medications, physicians do not recommend this drug if you suffer from liver or kidney failure. In addition, the elderly and alcoholics need adjusted doses, since this drug remains in their blood longer than in that of a normal adult.

Specialists use Paroxetine to treat mainly episodes of major depression, especially when other antidepressants of the SSRIs type have had no effect since this drug is the most potent in its class. Other uses in treatments are in the following cases:

As mentioned, experts use this drug primarily in major depression, the worst depressive state that exists. Some of the symptoms of this pathology are the persistent decay of the mood, social isolation, loss of all interest and pleasure, sleep disorders, feelings of guilt, and so on. Paroxetine can restore most of these signs, even returning the patient to normal, of course, always in the company of appropriate psychological interventions.

Physicians may also prescribe this drug for mild depression; however, this is the most powerful SSRI of all, the most potent pharmacological resource for depression.

Many experts have carried out several comparative studies between all the drugs used for depression, and although in most cases it was not possible to establish a definitive conclusion and they recommend further study, paroxetine always turns out to be the best chronic treatment for depression.

Premature ejaculation is the most common sexual problem in men, which refers to the sudden expulsion of semen before you want it. Psychiatric organizations have established globally accepted concepts, reaching a consensus of <1 minute as the standard time for premature ejaculation.

For longtime specialists thought that this was a psychological disorder, in fact, they describe it in the older psychiatric literature, but they now know it is a neurobiological disease whose origin lies in the levels of serotonin. 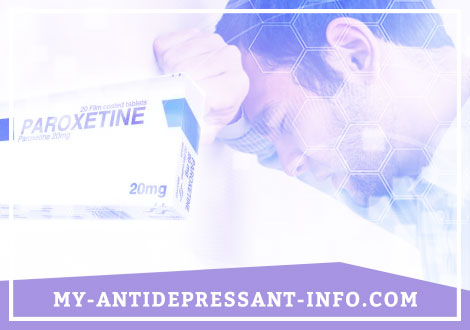 In recent years, physicians have used paroxetine to treat these patients, achieving to be a key drug and almost indispensable in the therapy against premature ejaculation.

Satisfaction of people who use this drug for this pathology is immense, and you cannot blame them, since this drug increased between 300% and 400% their time before ejaculating.

Side Effects: There is No Perfect Drug

All drugs cause side effects, and paroxetine is no exception, so much power had to end up in something. The high potency of this drug to meet the demands of serotonin in the body not only causes positive effects, but also negative ones.

All drugs related to neurotransmitters (such as serotonin) have uncomfortable adverse effects, yet their positive effects always stand out.

The following are symptoms secondary to the use of paroxetine:

This is one of the most studied drugs for its adverse effects. Some of these trials mention the relationship between their use and the increase in suicidal behavior in children and adolescents, as well as their hostility and self-harm.

Similarly, abrupt cessation of paroxetine use can trigger symptoms of discontinuation such as dizziness, nausea, vomiting, diarrhea, etc. as occurs with sertraline and fluoxetine.

Is Paroxetine the right medication for me?

Choosing whether the drug is good for you depends solely on your doctor. However, there are several key points that we need to keep in mind with the use of paroxetine:

Unbelievably, doctors can prescribe paroxetine for different pathologies depending on the dose interval in which you use it. An example of the diversified use according to the time of administration occurs with depression, where you have to take it daily, and premature ejaculation, where you use it on demand.

If you missed the dose, attach it to the one you have closest to you. If it has been a short time since you were supposed to take it, do so. However, if there is not much time left for the next tablet, it is best to wait. Having very high concentrations of serotonin can also put your life at risk!

2) Take care of the liver and kidney

Using this drug is difficult, especially for people with high blood pressure, diabetes, cirrhosis or any other disease that damages the liver or kidney. Let us remember that this is the way to get rid of paroxetine! If we do not eliminate this drug properly, it will accumulate in the body and end up being harmful.

Most antidepressants take months to take effect -about 2-3 approximately- and paroxetine is not the exception, it takes at least two weeks to show improvements on the symptoms. Even when the symptoms go away, and the disease is "apparently cured," your doctor will continue to give you these medications for a few more months.

Your doctor should monitor the dosage and use of this drug well, as it is so delicate. Normally they make readjustments in the first two or three weeks of treatment and they have a strict control during the first year.

5) Overcome the side effects

We already pointed out that there are many undesired effects accompanying the use of this drug; what is important is that you learn to adapt your life to them. As mentioned above, it can cause drowsiness and altered reflexes, so it is best that you do not drive during the months in which you consume paroxetine. In addition, if you notice very intense symptoms, convulsions or severe sleep disturbances, better consult your doctor, remember that this drug is not for everyone and not everyone can tolerate it.

After prolonged use of any drug, you cannot simply abandon it or stop taking it. Abruptly stopping any medication can have harmful effects, and paroxetine is no exception. If you want to stop taking this drug, it is best to consult your doctor and work out a schedule where doctors gradually lower the doses.

Contraindications: When NOT to use

The main contraindication of paroxetine (like the rest of the SSRIs) is that you cannot take it along with another monoamine oxidase inhibitor type antidepressant drug (MAOI).

Simple: The enzyme monoamine oxidase A degrades serotonin. If anything else saturates the enzyme, serotonin concentrations grow and can lead to a serotonergic syndrome, a clinical reaction that can become fatal. Therefore, always wait for a period between treatment with MAOIs and SSRIs.

Another contraindication of paroxetine is to take it along with another tricyclic antidepressant, as the drug inhibits the liver enzyme that removes these drugs from the body. The effects of paroxetine on this enzyme can last up to a week after treatment cessation, so you should be very careful after changing therapy. The main adverse effect of this interaction is a symptom of toxicity, although sometimes sudden death has occurred.

Physicians do not recommend this drug in people with hypersensitivity to it, as well as if they have a history of mania, because all antidepressants can transform a depression into a mania in people predisposed to it.

In addition, you cannot use this treatment during pregnancy, since it generates malformations in the cardiovascular system in the first months of development of the fetus or problems in newborns if the mother was on medications during the last months of gestation with paroxetine. With breastfeeding, in principle excretion through milk is minimal, but observe the child for greater safety.

The ideal drug: A lost concept

All drugs have side effects today. The psychiatric drugs generation is relatively recent, so they do not have the same number of studies that support them –as other drugs- and manufacturers have not studied their modifications as much to lessen their cumbersome adverse effects.

Test the benefits and side effects; this is one of the most potent drugs for a delicate disease.

The ideal treatment for depression will always depend on the specific characteristics and the subtype you suffer from, but the fundamental tools are psychotherapy and pharmacotherapy.

Sometimes it feels like we are heading towards worse damage when we take drugs that seem to cause alterations in us. However, no solution is easy and more so when it comes to depression, paroxetine is a very useful drug that we should not neglect.